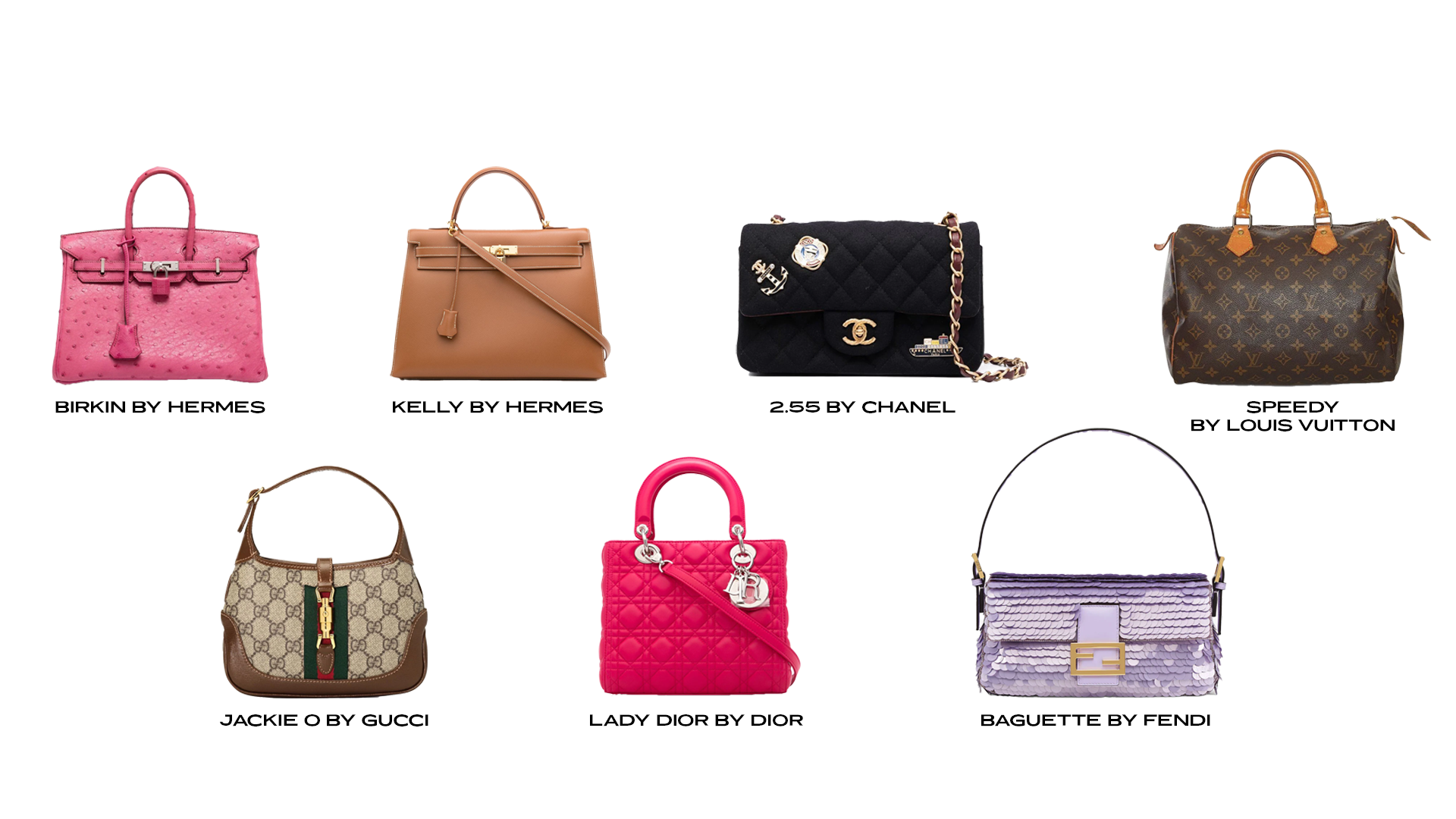 There are bags that have become true style icons: exclusive, precious but above all timeless and rich in history, they go beyond all fashion and seasonality, either in their most classic version or revisited in a contemporary key, but still faithful to the original line and consequently recognizable at first glance.

We begin our roundup with the most famous of all, the bag known even to those who know nothing about handbags, the Birkin by Hermès, a cult object, seen in movies and TV series as well as mentioned in a variety of songs. songs. Inspired by Jane Birkin, who in a chance meeting on an airplane with Jean-Louis Dumas (owner of the fashion house at the time), had expressed a desire for a capacious but feminine bag (a weekender, as we would call it today), it is still a myth that stands the test of time and a true status symbol, as well as the holder of the title of most expensive bag ever.

The Kelly (also Hermès-made) has also entered the public imagination, despite a rather modest origin story as a men's riding bag. Relaunched as a women's handbag in the 1930s, it got its name when Grace Kelly sported one in front of the paparazzi in the 1950s (rumored to hide an onset of pregnancy...).  It's a classic hard-molded handbag, the trapezoidal shape, the two unmistakable straps winking at its saddlery origins and giving it a tone of chic not prissy elegance, ideal for daytime.

Continuing in the series of iconic bags with a fascinating history, can't send Chanel's 2.55, an accessory passed down from generation to generation with mothers lending them to (lucky) daughters. Born in 1955, it revolutionized forever the way of carrying a handbag. Indeed, Coco Chanel felt the need to free women's hands from the inconvenience of carrying only hand bags or clutches. Inspired by military bandoleers, the Chanel 2.55 focuses on refined practicality with its convenient chain to be carried on the shoulder. And perhaps not everyone knows that for decades the bag's clasp mounted a simple swivel, and it wasn't until 1988 that it was replaced by Karl Lagerfeld with the distinctive interlaced double C.

Another famous monogram, which contends with Gucci and Chanel for the supremacy of instant recognition, is that of Louis Vuitton's Speedy, or the trunk bag par excellence. Created in the 1930s, it was initially conceived as a scaled-down version of the Keepall bag with which Louis Vuitton had landed in the luggage world. Its global success is linked to another movie legend, Audrey Hepburn, who fell madly in love with it and in 1965 requested a customized version from the brand, slightly smaller than the one on the market. Thus was born the smaller model, the Speedy 25, still in demand today. Available today in five different sizes, it is made of what at the time was a revolutionary material since it was foldable and waterproof, namely the very practical rubberized canvas...of course with the famous all over logo print.

Among the most desired It-Bags of all time we can also list Gucci's Jackie O. The bag originated in the 1950s as the "Constance," a soft sack shoulder bag that was the forerunner of what we now call the "hobo bag." Its hallmark is the lobster clasp, also known as the piston clasp. It wasn't until 1961 that Gucci renamed this bag "Jackie" after it became the favorite (and over-photographed) accessory of the very elegant Jacqueline Onassis, former wife of U.S. President John F. Kennedy and second wife of Greek shipowner Aristotle Onassis. Over time, the Jackie has been subjected to various restyling and offered in a variety of sizes and colors, up to and including that of Alessandro Michele, a proponent of its genderless metamorphosis.

The legend of the Lady Dior, like the Kelly or the Birkin, is linked to the late Princess Diana, who, after receiving one as a gift in 1995 from then-First Lady of France Bernadette Chirac, ordered one in every type, color and material. Initially named "Chouchou" ("favorite" in French), it was promptly renamed Lady Dior in honor of the princess. It is made of lambskin, with precious hanging lettering charms and, above all, the unmistakable "Cannage" stitching, which creates a very refined faceted effect. This particular texture has become the emblem of the Maison, and legend has it that Christian Dior was inspired by one of his favorite armchairs to make it.

Another bag that needs no introduction and is celebrating its 25th birthday this year is the Baguette by Fendi, a small shoulder bag with a short shoulder strap so that it can be placed under the arm like the French "filoncino" that gives it its name.  The object of desire for Carrie Bradshaw in "Sex and the City" and, consequently, for all fashionistas of the early 2000s, the Baguette was designed by Silvia Venturini Fendi in 1997 to be functional and easy to carry, as well as perfect for transitioning from day to evening. Back very much in vogue with the Y2K revival, it is available in many variations of material, color, and finish, which revisit its late 1990s minimalist style in a contemporary key.

Wind in the sails for designer labels as new factories open, leading to more employment in Italian manufacturing districts