Exotic leather? There is nothing more natural and eco-friendlier 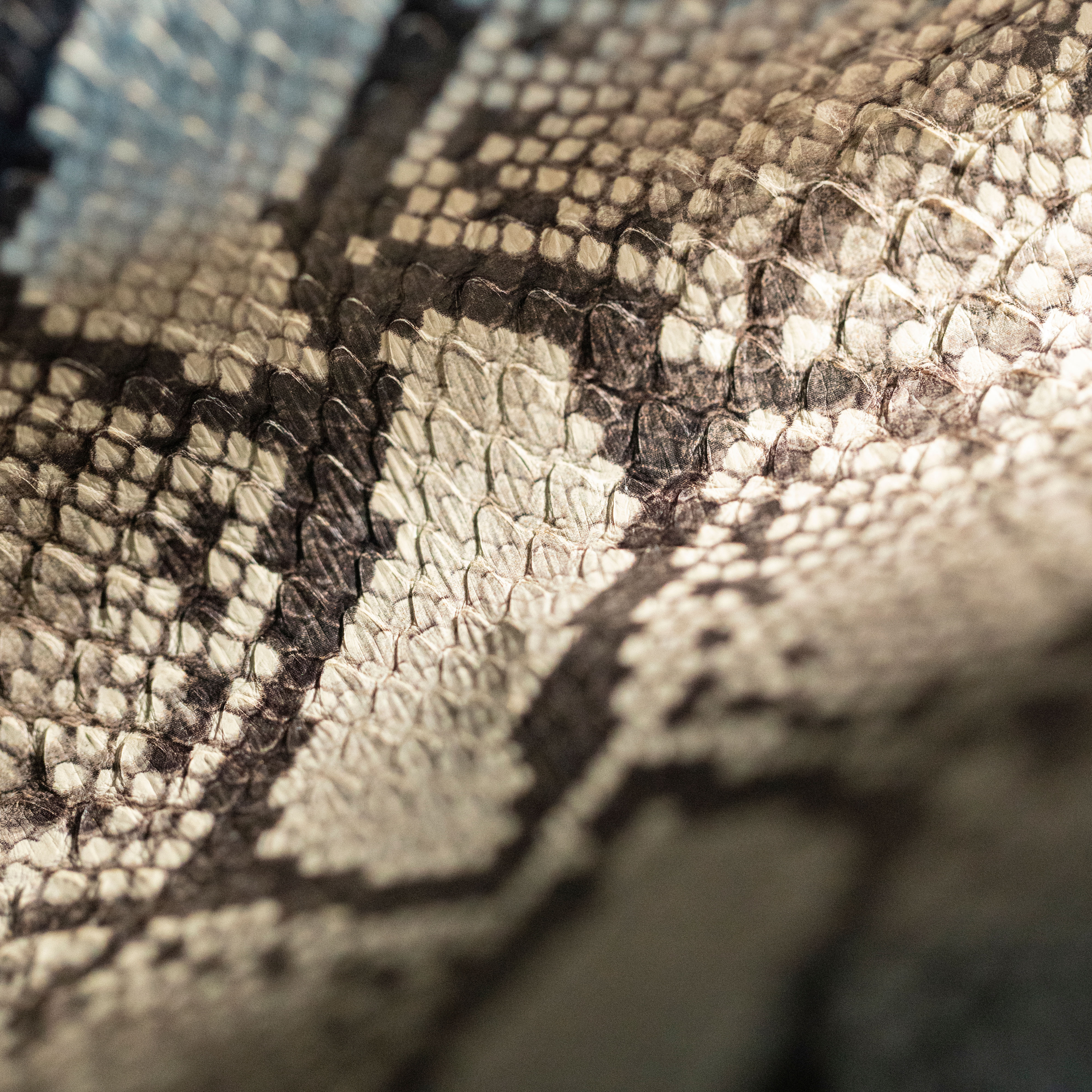 During the last edition of Lineapelle, Leather&Luxury met Marco Sani, CEO of the ex group XPP7, currently merged with Ambria Holding to form Minerva Hub, a hub that includes the Zuma and Casadacqua tanneries in Santa Croce sull'Arno, specialised in exotic leathers. With a long militancy in the tanning sector as a leather technician, Mr. Sani spoke with us about some current hot topics concerning exotic leather, its traceability, respect for animals, and the environmental impact of processing.

Mr Sani, let us ask an “easy” question: how sustainable is exotic leather?

«This is anything but an easy question! First of all, leather itself is already a very natural and environmentally friendly raw material. Add to this the enormous efforts that the chemical tanning industries are making to lessen the environmental impact of processing making it much easier to assimilate than in the past. Furthermore, there are international industry indexes at a global level that clearly analyse the ecological impact of the production cycles of the raw materials used in each sector. Here, exotic leather ranks with a much lower index than any other type of certified “vegan” material. Not to mention the life cycle. In many alternative materials, the end of life is much more impactful and devastating: plastic ends up in the sea, not leather. Leather, on the other hand, has important recovery and recycling options».

A recurring complaint made about your industry is the way reptile skins are sourced. What can you tell us about this?

First of all, all exotic skins used for fashion are a food source in the countries of origin. In many of the areas of the world where exotic leather is produced, meat from the skins of killed reptiles is necessary for the survival of the local population. Clearly there is a suppression activity, but it is carried out according to planned criteria, in the most ethical way possible. Specifically, the trade of killing the animal is a safeguard of nature itself: in Louisiana in the 1970s, due to land devaluation and poaching, there were about ninety thousand crocodiles left in the wild. Therefore, very clever laws were passed to preserve them from extinction, which were later taken up by other countries. Alligator eggs were taken from the wild to be developed on special farms and then 10% of the collected eggs were released into the wild. Thanks to this intervention, the population of wild Louisiana alligators currently stands at two and a half million, according to the latest census in 2018. Thus, the breed has been saved along with the biodiversity of the environment, preventing the exploitation of its resources. In Indonesia, on the other hand, it is estimated that between 150 and 300 thousand people live off hunting lizards for their food. As for the python, nothing is thrown away. The skin is used by the fashion industry, the meat is eaten, and all the entrails and bones are dried and ground for Chinese medicine».

Is the tanning process more polluting or, hypothetically disposing of leather by incinerating it?

«It would be an environmental tragedy if that happened. If we pollute everywhere, it's difficult to intervene. That's why the tanning districts exist; they can form a syndicate and deal with the problem of disposal in the best way possible, concentrating the critical points. It's true that scandals do crop up from time to time, as recent reports in Tuscany have shown, but in this case effective government regulation can help prevent these problems. However, investments in technological development in this direction are very advanced and, especially in Italy, there is a huge effort by tanning chemical companies to minimise the environmental impact of processing. This issue has become an important factor for our sector, with tanneries also acting on the basis of client requests. The consumption of water and electricity in the tanning process has been greatly reduced for tanning the same square metres of leathers compared to the past, but this cannot be said for the development and production of synthetic materials».

So, what continues to be the main critical issue in the tanning sector?

«Tanneries are not a solved “problem”, but the sector is evolving. The criticalities advocated by the market are mainly present in the areas of procurement, traceability, and sustainability, where attention and sensitivity to these issues is not consistent in every country in the world. However, the Italian tanning sector remains one of the best from this point of view. We are trying to export our ethical codes abroad, where there is often a cultural gap that is an obstacle to development. But we are not stopping, and we hope to be able to start travelling again soon after these two years of stoppage due to Covid».

In your opinion, how much does the lack of information about leather processing affect the public's perception of the tanning sector?

«It weighs heavily. Scandal is much more newsworthy than good behaviour. The tanning industry does not have to justify itself, but for the image of the whole sector, for example, it is not helpful to say, as is often the case, that we are a 100% virtuous sector because, at the moment, that is not the truth. It would be necessary to better communicate that we are investing, both as companies and as a consortium, to constantly improve our performance, including environmental performance. In this way, perhaps we could avoid the negative publicity of PETA activists or environmentalists who protest in front of fashion shops dressed in plastic suits calling us “murderers”... I wonder who pollutes the most amongst us? ».

Lineapelle took place at the same time as Milan Fashion Week: in the S/S fashion collections, there was an overwhelming return of leather in clothing and accessories. Does the same apply to exotic leathers?

«Yes, absolutely. This does not apply to all exotic leathers, but many of them are enjoying interesting success again. Due to the value of the raw material, the number of bags and accessories made from exotic leather is considerably lower than for articles made from calfskin and/or fabric. But accessories made of fine leather are the most qualifying for fashion brands. This market feedback has been very indicative in this post-Covid period. The momentum is good. In general, hardly any major brand has ever abandoned the use of exotic leathers. Those that have, in the past, may have made choices that were not always consistent. Often, the reasons given for abandoning exotic leathers are now mostly outdated. So the trend remains positive».

Traceability of exotic skins: is there a functioning system in Italy?

«When it comes to traceability in the field of reptiles and the like, the terrain is very delicate and varied. The trade regulations that apply to certain exotic skins, for example, do not apply to other types of reptiles. With regard to farmed alligators, as previously mentioned, everything is very clear and codified. Then there is CITES (an international agreement between countries that aims to protect endangered plants and animals by regulating and monitoring their trade): a document that has a precise recognition for every single imported skin. For lizards, the situation is similar: government regulations in countries such as Indonesia and Malaysia, which deal with the leather trade and account for precise quotas of their exports, are quite effective in terms of traceability. With other skins, this mechanism is more difficult to detect. However, there are currently many studies carried out by industry associations that are working in these areas. SARCA, for example, works for anyone who buys reptile skins in the East and is developing traceability consistency projects in this direction».

Some companies are proposing biodegradable tanning for calfskin. Is there already something similar for exotic skins?

«Casadacqua has already developed its own project. First of all, when we talk about tanning, we are dealing with two phases: the production process and the actual product. The metal-free product is already a big step forward, both in terms of regulations and health for the consumer. The other aspect is production: we have worked hard to develop a method that has a minor impact on the working environment. A qualitative eco-friendly leap in terms of wastewater and the environment itself. With the development of this process, we are already at an advanced stage, almost to industrialisation. The direction taken is interesting and can be applied to all types of leather, not just exotic ones. Although it consumes more water and time than conventional tanning, our method has enabled us to achieve a significantly lower impact on the product, in order of magnitude, than metal-free tanning. The UNIC standard for metal-free tanning states that the product must not contain more than one thousand parts per million of the sum of the metals used for tanning. We have achieved a metal-free product with less than one hundred parts per million. When we eat meat or vegetables we take in many more. The next step is to make sure that the resulting wastewater has a low environmental impact. Then there is the question of solid leather waste, such as the first shaves. Those, in our opinion, have the natural characteristics to be disposed of directly in the fields. In this regard, however, we need to find an important biological laboratory that can certify this element with certainty, and so we will continue our research work».